Calgary was, well....brown. I was shocked by the large expanses of dormant grass. I wasn't quite aware that Calgary was still prairie-land. The mountains, the little mountains way off in the distance were quite pretty. But they were really far away. Not to far for driving, just far for seeing.
Anyway, after we met Sarah at the airport, she whizzed us back to her house and scooted back to work for a meeting. Nathan attempted to nap and I re-organized the items in our suitcases. We didn't do much that first night but Nathan really enjoyed getting to know Sarah and Ryan a little better. 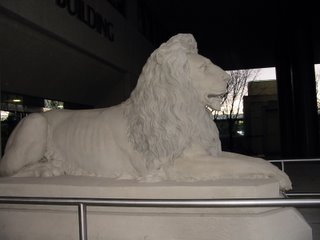 On Friday, we headed downtown. We discovered Aslan lying outside of City Hall, said "Hello," and went up to see Ryan's office. After Nathan explored Ryan's office, we meandered over to the C-train stop and went to the Science Centre.

My lasting memory of the Centre will be the coat hooks. No lockers. No need to cart our stuff around. Free coat hooks. Safe coat hooks. It was thrilling!!
Nathan's best memory of the morning was working a 'crane' with sponge blocks to transport. It was a very fun morning.
We then grabbed some lunch and met my longtime friend Bea at the Calgary Tower. Though there were magnificent views of the mountains and the river, Nathan most exciting moment was watching the train pass by and stop at the train yard. Such a boy! We headed back home, with Bea in tow, and whiled away the time at the Fish Creek bus stop. 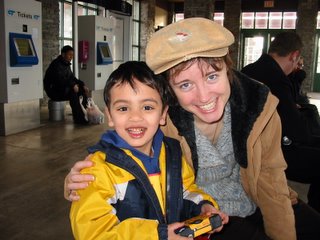 There were lots of firsts for Nathan on this trip. First time on a plane, on a train, in a bus and on a mountain. Yes he likes it, Sam I am!

On Saturday, we travelled to Canmore and Banff. Now I can say I've been to Banff. It was a nifty tourist spot but I'm still a little scared of mountains. They were cold and grey and mockingly inviting. Yet beautiful. 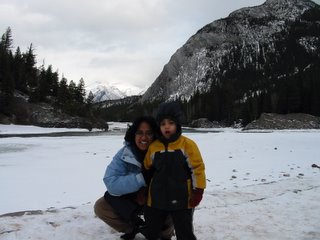 Here we are! At a small waterfall, amidst the mountains. This spot was beautiful.

I know this is just a taste of our trip. More later, as I get the chance.